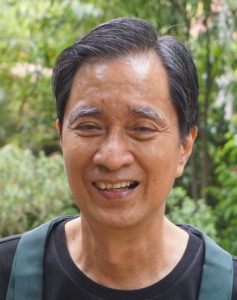 Sanbo Zen teacher from the Philippines, Rollie del Rosario, will be giving Thursday night’s teisho in our virtual Zendo on May 14.

Join us for our regular sit at 5:30pm. Rollie’s talk will begin at 6pm.  Rollie is the head teacher at the Zen Center Philippines where he began practicing Zen in 1982 and soon became a student of Sr. Elaine MacInnes, who founded Zen Center Philippines together with Yamada Ko’un Roshi, then the Abbot of the Sanbo Kyodan (Sanbo Zen). After years of training, Rollie became an assistant Sanbo Zen Teacher in 1998, full Zen Teacher in 2003 and was nominated as Associate Zen Master in 2014.

Rollie worked for over 25 years with the Asian Development Bank (ADB)  as a photographer, filmmaker, and audiovisual producer. He retired in 2009.

"I and all beings have simultaneously attained the Way" ~ Buddha Description: This is the first i[...]

Dharmatalk: Zen and the New Story

"Meditation is bound to fail if it is being done to fix a problem." ~ Barry Magid Description: In[...]

Today's Message from Henry is a short excerpt from Henry’s path of training as recounted in One Blad[...]

In the place of our residential summer sesshin, we are offering a four-day Virtual Retreat,  Thursda[...]

Message from Henry is an excerpt from Henry’s path of training as recounted in One Blade of Grass. [...]